Sharon Houkema
Kunstwerken
SOLAR TIME
ECOLOGICAL IMAGINATION
Kalender
HOW DO YOU READ
THE PINGJUM PRE-ENACTMENT PROJECT
GARDEN SPEAKERS
Positieve Desintegratie Meditatie
PLAYING THE BUCKY CARD
HORIZONTAL FAÇADE
De Bibliotheek
WHY TIDY MY EXHIBITION SPACE WHEN THE WHOLE WORLD IS IN A MESS?
UNTITLED (MONOCHROME)
THE EYE OF THE STORM 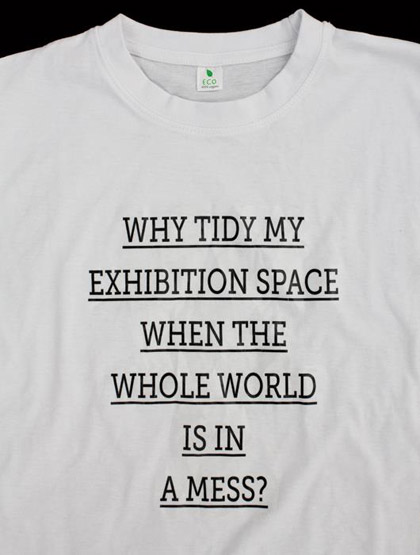 CONTACT
mail at sharonhoukema.info
NED / ENG
Kunstwerken
SOLAR TIME
ECOLOGICAL IMAGINATION
Kalender
HOW DO YOU READ
THE PINGJUM PRE-ENACTMENT PROJECT
GARDEN SPEAKERS
Positieve Desintegratie Meditatie
PLAYING THE BUCKY CARD
HORIZONTAL FAÇADE
De Bibliotheek
WHY TIDY MY EXHIBITION SPACE WHEN THE WHOLE WORLD IS IN A MESS?
UNTITLED (MONOCHROME)
THE EYE OF THE STORM

CONTACT
mail at sharonhoukema.info
NED / ENG
***Spoilers ahead***
- On miniatures

Crawling my way through the doors of the Probe exhibition space reminded me of the 7 1/2 floor in the movie Being John Malkovich, written by Charlie Kaufman, which is half the size of a normal office floor. Hidden in one of its rooms is a small door, which turns out to be a portal into the mind of actor John Malkovich, enabling anyone crawling in to experience life through his eyes. People soon cue up for a chance to leave their own lives - if only for 15 minutes. There are more examples of stories in which a trip into a miniature universe takes place; in a way this is what stories are. A wonderful example is the short story by Steven Millhauser titled In the Reign of Harad IV, about a lauded maker of miniatures who - out of his love for detail - starts making his miniatures smaller and smaller. At first his audience is thrilled with his new creations but having to look through lenses to see anything at all they begin to suspect trickery and lose their interest. The maker of miniatures on the other hand is so curious about the world of the very small, that he ventures on, even if his creations are no longer seen. Not even by him.

Online one can find plenty of supplies for constructing personalized versions of the world of the small. All kinds of military, industrial and passenger transportation vehicles to ride around in mountain scenery, as well as lots of stuff to decorate 19th century styled miniature homes. The miniature enables one to playfully explore mastership, while simultaneously rehearsing nostalgic versions of the roles adults have in the real world. In the real world, Reality TV is scripted, politicians are expected to lie and nearly everyone styles their identity for media consumption. It is not easy to tell fact from falsehood and fiction from reality, and to unravel the many subtle ways power structures feed into our mediated reality is quite the task.

I myself am fascinated by the aesthetic features of geological models, and models of climate change and ecosystems. There is a sugary quality to the translation of data into the easy-peasy bite size chunks of pie charts and layered data cakes. Many use psychedelic colouring, as if it concerns acid tabs that will take you into an altered state of planetary consciousness after consumption. The resemblance here seems to be entirely incidental but in other cases it is not. The relation between a WW1 medal, the LGBT flag and the Apple logo goes at least all the way back to Genesis. God sent the rainbow as a sign to earth and its inhabitants of his commitment to not destroy the world again. Anchored to the rainbow, as a sign of the battle's end, is the 'Victory Medal', which was awarded to soldiers who served in World War I. Starting with a peace march in Italy in 1961 the rainbow flag became popular with the peace movement and various counter culture groups. The 60's Californian practical, innovative spirit is prob- ably what the Apple Macintosh company was tapping into when they had their logo redesigned, as well as showing off the graphic possibilities of their machines. The LGBT community flag has been used since the 70's as a plea for the freedom to openly be lesbian, gay, bisexual or transgender.

In several publications and broadcasts on the subject of curbing global emissions, I came across expressions along the lines of 'a miracle needing to take place' for governments to meet the 2 degrees warming limit1. Depending of course on what one holds to be miraculous, I see how such phrasing has a demotivating effect on people: no point in chasing rainbows is there? Perhaps what is needed here is not a miracle but something to 'sink your teeth into', which refers to the desire for a task with substance, a challenge to get oneself deeply involved. Perhaps this is not totally unlike the way many people experience the urge to nibble away at the tiny limbs and cheeks of babies; not that they will actually devour them, but because they feel so positively energized.2 Exactly why this happens still remains somewhat elusive, to me at least, when I think about the fact that lots of kids in the world do get hurt.

The title of this exhibition was taken from an article by activists Nicole Vosper and Graham Burnett 'What Is "Liberation Permaculture"',3 in which they are referring to a quote attributed to Buckminster Fuller: 'You never change things by fighting the existing reality. To change something, build a new model that makes the existing model obsolete', which they suggest is 'a convenient way of simply putting hard questions to one side' while getting on with 'building the new world in our hearts.'